skip to main | skip to sidebar

The Conference of the Birds - Simurgh portrayed by Attar 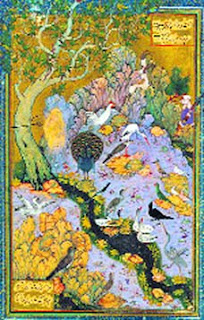 What is Simurgh? This is the first question which comes to a visitor's mind while visiting my page (If the person doesn't have any prior knowledge about it). So today I introduce Simurgh to such readers.
Simurgh is a mysterious, benevolent, mythical flying creature in Iranian mythology. A reference to Simurgh is found in the poem "The Conference of the Birds" (Mantiq at-Tayr) written by Sheikh Farid ud-din Attar (born 1145-46 in Nishapur – died c. 1221) . To understand Simurgh as portrayed by Attar, we first have to know the story as constructed in this poem. Here is a short summary:
Birds of the world hold a conference to search for their king, as they have no leader. The hoopoe encourages them to the quest to find their king, called "Simurgh", who lives behind the far-away mountains of Kaf. Soon, under the guidance of hoopoe, a group of birds start a journey to find Simurgh.
But the journey comes out to be very difficult. They pass through seven valleys, namely:
1) Aban (Flash) (or "Talab" which means Quest)
2) Ishq (Love)
3) Marifat (Gnosis)
4) Istighnah (Detachment)
5) Tawheed (Unity)
6) Hayrat (Bewilderment)
7) Fuqur o Fana (Selflessness and Oblivion)
In each of these stages, there are several events by which the birds learn different lessons. One by one, in each of these valleys, birds give up the journey, not being able to endure it. Only thirty birds are left when they cross their final valley and reach the land of Simurgh. There, only what they see is their own reflection in a lake, and not the mythical Simurgh.
There in the Simorgh's radiant face they saw
Themselves, the Simorgh of the world - with awe
They gazed, and dared at last to comprehend
They were the Simorgh and the journey's end.
They see the Simorgh - at themselves they stare,
And see a second Simorgh standing there;
They look at both and see the two are one,
That this is that, that this, the goal is won.
They ask (but inwardly; they make no sound)
The meaning of these mysteries that confound
Their puzzled ignorance - how is it true
That 'we' is not distinguished here from 'you'?
As "Si" means thirty and "Murgh" means birds in Persian, so Si-murgh means Thirty Birds. Interestingly, these birds found their king in their Collective Self. This Collective Self appears when one and many are the same thing.
(The above summary has been made with help of wikipedia and free texts available online. Translation quoted is by Afkham Darbandi and Dick Davis)

Thank You - I am so grateful that you took the time to post this explanation for those of us who are new to this mythology- ie might I call it - deep universal truth expressed with metaphor and story?

I plan to return soon to spend more time with this post as well as your blog. This current post will help me out a great deal. I am a lover of literature - especially that which has such applicable meaning for all of humanity.

Also, the mirror motive is highly evocative to me of so many truths which today much writing simply seems to skip over as if the authors are fully satisfied with merely skipping rocks on the surface.

I am new to the deep understanding of "Collective Self" and "Collective Ego" yet understand in small measure in YOUR context here and having seen the use of merely "Self" with capital "S" in philosophy and religion.

I dont know why Wikipedia names the first valley as "Aban" and "Flash" - maybe some manuscript which I don't know of. In the standard edition published from Tehran, as well as others which I have seen, the first valley is named "Talab", which Afkham translates as "Quest". But thanks for posting this here - now I can also refer to it when friends asks me the same question: what is Simorgh?

Thanks Khurram Sir, I have also mentioned Talab in the post now. Please let me know if there are any more improvements.

And thanks Connie for your comments. I hope I will post similar things in future now which may help people in understanding the concept of Collective Self.

Thanks alot for this explanation.

Now i have understood it properly. I think each one of us has to pass from these 7 valleys in order to reach our destinations and for this we need to have courage and belief on ourselves!

Yes ReeBz. And now you may aslo be able to comprehend my other posts ! :)

..please give me some information on "the necessity of fall and redemption in a spiritual journey with reference to Sheikh Sam'an".

Rehan Damani
I'm a human being with curiosity of finding about life and world.